How do you suppose Rick Joyner, with only a Grade 12 equivalency diploma, obtained his Doctorate in such short order? After all, a real, accredited, bona fide Ph.D. takes about 14 years of very rigorous time-consuming study. Now, I am not trying to infer that Joyner lacks intelligence—that is certainly not the case, but he is deceptive.

For those of you who may not have an academic background, a Bachelor’s degree takes four years to complete, and a Master’s Degree takes and additional two to three years. Both of these degrees must be completed before a Ph.D. is undertaken. As a rule, a Ph.D. will take twice as long as a Bachelor’s degree to complete. That means that to obtain a real (earned and accredited) Ph.D. recognized by the academic community, you would need to complete about fourteen years of post-secondary education. Now, there might be some slight variations in that timeframe based on the particular degree but it won’t vary by much. So, going back to my original question, how did Rick Joyner obtain a Doctorate so quickly? He didn’t.

As you might have guessed, Rick Joyner’s Doctorate along with that of his Missions Director, Jorge Parrott is fake. Their doctorates came from the North Carolina College of Theology, which claims to be accredited. Sure, and I could crawl into the oven and claim to be a biscuit—whatever. They state that they are a member and independent subsidiary of the Southern Accreditation Association of Christian Schools and Colleges, the American Association of Theological Institutions, and the American Accrediting Education Association of Christian Schools. That must count for something—right? Um no, I’m afraid not. Not one of those associations is recognized by the US Department of Education as a crediting agency—not one.  The following is a screen capture of their website.

So, let’s take a look at the *ahem, doctoral program for the North Carolina College of Theology. By golly, would you look at that! It only requires a GED (grade 12 equivalency). Now, as a Master’s Candidate in English, and a holder of two earned Bachelor Degrees, I know full well that no accredited college will ever let someone enter a doctoral program with a GED! To enter a real doctoral program, you must have earned the preliminary degrees, and have an extraordinarily high, grade point average. Not so at the North Carolina College of Theology. No sir, all you need there is experience. Well, experience and money—let’s not forget the money!

North Carolina College of Theology claims accreditation through Accrediting Commission International, Inc. of Beebe, Arkansas (ACI) run by Dr. John Scheel. It turns out “Dr.” Scheel has a fake degree as well. Surprise! His Ph.D. came from the Toledo Bible College and Seminary, which was run out of Ohio by authorities for being a diploma mill. It then changed its name to Trinity Theological Seminary and moved to Indiana where there are fewer regulations. It continues to be a diploma mill. “Dr.” Scheel ran a false accrediting agency in Missouri but was caught in a sting operation by Eric Vieth, the assistant attorney for Missouri. He was subsequently charged with fraud. However, why let a good scam go to waste. He changed the name of his crediting agency from IAC (International Accrediting Commission) to (ACI) Accrediting Commission International and started back up in Beebe Arkansas (Holford, David. “North Carolina College of Theology.” Davids Daily Diversions. 30 July 2011. Web. 19 May 2015).

I guess I can understand why Joyner would get hooked up with a diploma mill. After all, if you are running a so-called University, it’s hard to attract paying students if professors only have a GED. I am in no way trying to demean those who have not obtained a degree, nor am I insinuating that those who have a degree are more qualified to be ministers of the Gospel than those who do not. What I am saying is that claiming you have attained a certain level of educational accomplishment when clearly you have not, is unconscionable and fraudulent.

Not only is Joyner’s own degree false, but he is issuing bogus degrees through his University. His degrees are granted through the same degree mill that his “doctorate” came from. In fact, it states right on MorningStar’s website that their Bachelor’s Degrees are awarded by the North Carolina College of Theology. Oh, and get this. You obtain a bachelor’s degree after just one year. That’s right, why slave away for four years for a real degree when you can go to MorningStar University and be granted a fake degree from a diploma mill after just one year. All you need is one year, oh, and money—don’t forget the money. 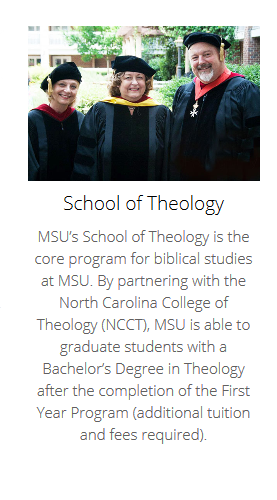 To the left is a screen shot of Joyner’s School of Theology division within MorningStar University.

Earning a degree means that you have undertaken the prescribed course of study. Having experience is not the same thing as having undertaken a rigorous and regimented peer-reviewed academic course of study over an extended period of time. I would think this goes without saying. I am not sure why someone would lie about this if not for pride or self-promotion.

Fake degrees seem to be rampant among charismatic pastors, and if you take the time to investigate, you will find that the vast majority of big name ministers have purchased and not earned their degrees. Names like TD Jakes, Joyce Meyers, Marilyn Hickey, Paula White, Mike Murdock, oh the list goes on and on but my energy wanes.

Mishel McCumber is a writer and researcher who spent close to twenty years deeply indoctrinated by the Neo-Pentecostal, Dominionist agenda. After a long period of study and detoxification, she made it her mission to educate others on the dangers of apostate faith and to instill in them a desire for sound biblical doctrine. She holds a BA Psychology, a BA Graphic Design/New Media and is a Master of Art's Candidate in English. Read More…